Swirl W@tch is now feature complete and you can play a new demo build here on Steam, just in time for the October Steam Next Fest. If you want to support the game please consider wishlisting it.

With the game nearing completion I thought I give you a retrospective of the so far. (Some of the features mentioned here concern the late game and are not present in the demo.)

Swirl Watch started out as a prototype made in 48 hours for Global Game Jam 2021. The theme was lost and found, which inspired a top down game where both you and opponents can constantly loose track of each other. I wanted this to be more sci-fi than submarine stuff, the gas giant setting emerged as a kind of amalgamation of these setting tendencies. So everything in Swirl Watch swims/floats in some thick, vaguely defined medium with strong currents and you can’t be sure where anything is unless it is constantly broadcasts it’s position or you hammer it with sonar. The game was and is largely unconcerned with how actual gas giants work, it only tries to achieve a vague semblance of plausibility.

The games art style was also a result of this setting. Vaguely inspired by Duskers I wanted objects to look like a constantly fluctuating mass of updating data points. These ships don’t look like glittery gridwork in the actual game’s reality, but you only every see them as your ship computer represents them. Swirl W@tch was originally prototyped half a year before Red Tether and the art-style bled over to that.

The game came together very organically, but ultimately was more action oriented than I had intended. The original prototype is now called Swirl W@tch: Perimeter and you can still find it on the interweb if you go looking.

For the Steam release I wanted to turn this prototype into a full fledged stealth game that uses a lot of genre conventions, while still retaining the original setting and detection mechanics. The first central change to accommodate this was switching the game’s goals from defense and interception to active infiltration. So instead of protecting a friendly station you now sneak into massive industrial installations and complete various objectives within them, making combat optional and stealth more viable.

For the later I also needed guards to be less trigger happy and have actual detection progression and sight-lines instead of instant detection. The original prototype had ships detected you by sound only, which was now replaced by them using lidar as their main method of detection. This also allowed to diagetically display enemy view cones (by showing the actual laser beams sweeping) and spot progression (it’s plausible that your ship can detect when you are being lased, even when you haven’t detected the ship that sweeps for you.)

Guards also needed actual AI and a lot of my time with the game so far was in fact spent on giving them a properly complex behavior tree. I started out with patrol behavior and soon realized that the setting would provide very little indication for where guards might move around. Gas clouds don’t have roads. Since patrols already used a hidden way point system I opted for making these visible in the form of patrol buoys. Almost every level chunk generates with strings of patrol buoys that might or might not have guards moving along them, hopefully creating a lot of interesting ambush opportunities for the player. With similar intent I also made guard posts visible as a different kind of buoy.

You might see a pattern here. The games setting is nicely distinct in my opinion, but also requires extra effort to re-establish genre conventions and show them to the player. Mainly cause by default it lacks easily comprehensible geography. In a conventionally stealth game that features man with gun you can rely on some basic preconceptions. Everyone knows that people move on footpaths and you can’t easily clime a cliff. So you play around these things and ideally use them to advantage. Path means patrols, wall means I can’t go there. Swirl Watch takes place in the clouds of an impossible environment and has to create these geographies from scratch.

Free floating structures and asteroids where also added early on to provide a varied physical space to sneak through. Everything in the game is hand placed, but with an X-com like lot system that randomly combines pre-made level chunks, hopefully in a manner that doesn’t show too much repetition.

Later in development I also added in level specific hazards and additional structures that provide more geography to move through.

With the setting and opposition established I moved on to giving the player tools to accomplish the job. Aside from a whole bunch of weapons, gadgets and passive ship upgrades I also added fall-back systems you can use independently of your gear, allowing to play runs subsistence style or with no gear at all. Boarding is your main way of engaging ships on such run. Not only allows it to interrogate flesh and machine for mission intel, a boarded ship is also completely at your mercy and can be disabled or destroyed at will.

Disabled ships can also be captured in classic balloon-strapping fashion. This will lead to a prisoner exchange after the mission, swapping ship commanders for their indentured subjects and unlocking new gear over time.

That gear then appears on the title screen which is unlock index, loadout menu and training area all in one. You can go into a mission with any gear you have unlocked as long as you don’t exceed your deployment budget, which resets for every mission. Any funds you don’t spend are taken into the mission and can be used to print random gear in the field for cheap. 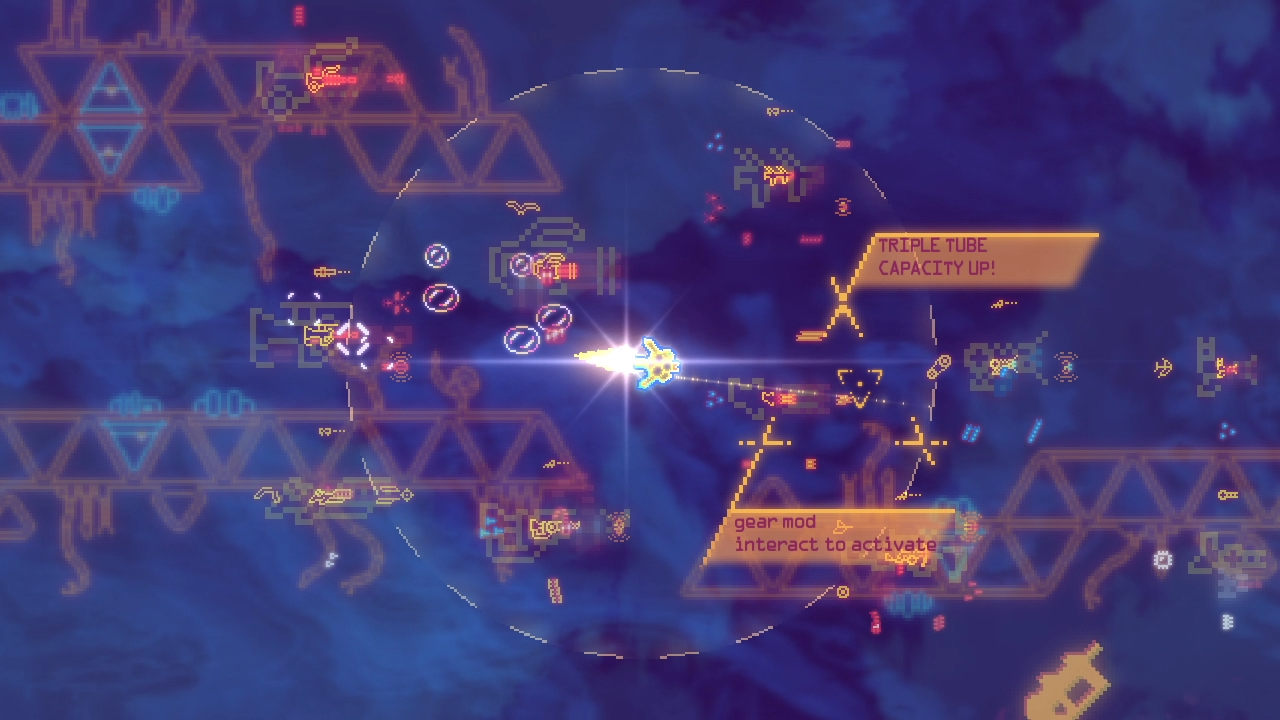 Mission objectives are as varied as you gear and most can be completed in multiple ways. If you need to get data from a relay ship you can accomplish this by trailing it and intercepting it’s transmissions, but you could also disable it from afar or directly board it (after separating it form potential escort ships or eliminating them.) Industrial sabotage can done by manually docking with it (noisy), by using torpedoes/planting explosives (even louder) or by expanding precious ammo of your silenced EMP weapons.

Getting intel to locate objectives is a big part of the game. There is no minimap and the game will only ever point you to objectives directly if you get transponder codes for ships. Most other objectives are revealed by telling you their quadrant, allowing you to navigate there via the quadrant naming system. (alphabetical left to right, numerically top to bottom)

All the way through I tried to make the games systems as transparent as possible to prevent situations in which you feel slighted by the game. Both sound propagation and lidar spotting is telegraphed in ways that should make it clear when a guard ships will hear or see you. Overall the game is a giant amalgamation of systems from various stealth games, with MGS V remaining the most prominent influence. The sound circles are very obviously inspired by Mark of the Ninja. Sniper Elite also made it into the mix: certain loud sounds can deafen guards temporarily, allowing you to use the environment or certain gadgets to hide your own noise.

Guards behaviors, objectives and gadgets eventually started to create some emergent gameplay I hadn’t even anticipated myself. My favorite example: Reinforcement ships are docked in a disabled state not unlike the one you can inflict with EMP or hacking. You can jump-start disabled ships and as long as they don’t immediately spot you they will d interpret this as being activated by command. The ship then asks for a reinforcement task and moves out to guard or escort an objective. This gives you a lot of options: Trailing the ship to the objective, taking it out after noting the direction it moves, strapping it with remote explosives to blow up whatever it is guarding etc.

Altogether I hope the game will provide an interesting experience. There is still some more content I want to add and for the next months I’ll be focusing on additional gear, enemy variety, zone variants and beta testing. Swirl W@tch is currently planned to release in early December, but I cant guarantee a release date yet. If you want to support the game please consider wishlisting it.